Partnership project of the Staatskapelle Dresden with the Gustav Mahler Jugendorchester.

With Arnold Schönberg’s Gurre-Lieder, chief conductor Christian Thielemann and the Sächsische Staatskapelle Dresden will bring one of the largest works in music literature to the stage of the Semperoper Dresden on March 8, 9 & 10, 2020: With 305 participants, including 6 top-class soloists, 150 singers from the MDR-Rundfunkchor and Sächsischer Staatsopernchor, and 148 musicians, Schönberg brilliantly draws unexpected registers of voice and instrument treatment. The performances of the Gurre-Lieder also take place as part of the partnership of the Staatskapelle with the Gustav Mahler Jugendorchester, whose young musicians can be seen in concerts with members of the Staatskapelle.

Between 1900 and 1911 Schönberg worked on his late romantic Gurre-Lieder and later called it the “key to my whole development”. The roots of the plot around King Waldemar and his beloved Tove, who is murdered by the jealous queen, can be traced back to the Middle Ages. Schönberg used Jens Peter Jacobsen’s version of the Danish saga and made it an impressive musical masterpiece. In the long history of the Staatskapelle, the Gurre-Lieder were first performed in a symphony concert: in August 1995 under the direction of the then chief conductor Giuseppe Sinopoli.

The Gustav Mahler Jugendorchester, partner orchestra of the Sächsische Staatskapelle Dresden since 2012, has been playing the season opening concert in Dresden every year since 2008. This year, the young musicians from all over Europe support the Staatskapelle in performing the Gurre-Lieder in almost all groups of instruments. In joint register rehearsals, the 39 young musicians were prepared for the challenging monumental work that Claudio Abbado had already worked on with the GMJO as founder and music director. Together with the Sächsische Staatskapelle in Dresden and a select group of soloists around Camilla Nylund, Christa Mayer, Stephen Gould and Franz Grundheber as speakers, they will also present the Gurre-Lieder at the Salzburg Easter Festival in early April. 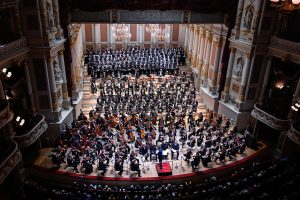