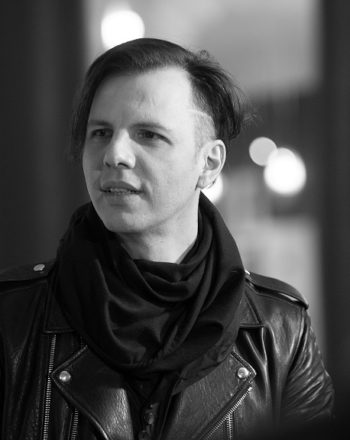 Teodor Currentzis is the founder and artistic director of the musicAeterna Orchestra and Choir. Since 2018 he has also been the principal conductor of the SWR Symphony Orchestra in Stuttgart.

Teodor Currentzis was born in Greece, and it was here that he initially studied music, but he has lived in Russia since 1994, the year he began to study conducting with the legendary Ilya Musin at the St Petersburg Conservatory.

He founded the musicAeterna Orchestra and Choir in 2004 at the start of his seven-year tenure as principal conductor of the Novosibirsk Opera and Ballet Theatre. He has worked with musicAeterna on sacred music of the Middle Ages as well as on Baroque operas and experimental works by avant-garde composers, including scores specially commissioned by the conductor. Between 2011 and 2019 Teodor Currentzis was artistic director of the Perm Opera and Ballet Theatre. In 2019 he and musicAeterna moved to St Petersburg, turning Dom Radio into their new creative home.

Teodor Currentzis is one of the founders of the Territoria Festival-School of Contemporary Art. Since 2012 he has been artistic director of the Diaghilev Festival in Perm, the city in which the famous impresario grew up.

Teodor Currentzis undertakes regular tours with both musicAeterna and the SWR Symphony Orchestra, performing in prestigious venues all over the world. As an opera conductor he has appeared at major houses in Russia and Europe, including the Paris Opéra, the Bavarian State Opera in Munich, the Zurich Opera, the Teatro Real in Madrid and Moscow’s Bolshoi Theatre. He has worked with key figures in the modern Western theatre, including Robert Wilson, Romeo Castellucci, Peter Sellars, Dmitri Tcherniakov and Theodoros Terzopoulos. He is a regular guest not only at the Salzburg Festival, where he made his debut in 2017, but also at the Ruhrtriennale, the Lucerne Festival and the Festival d’Aix-en-Provence.

Teodor Currentzis and musicAeterna are exclusive Sony Classical artists. Their critically acclaimed recordings of works by Mozart, Mahler, Beethoven, Tchaikovsky, Rameau and Stravinsky have received numerous international awards, including the Echo Klassik Award, the Edison Klassiek Award, the Japanese Record Academy Award and the BBC Music Magazine’s Opera Award. Teodor Currentzis has received Russia’s prestigious theatre award, the Golden Mask, on no fewer than nine occasions. He has also been the recipient of the Alfred Toepfer Foundation’s prestigious KAIROS Award. In 2018 the musicAeterna Choir was named Choir of the Year at the International Opera Awards.