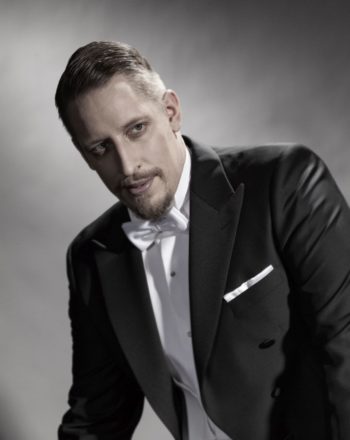 Mika Kares is one of the most sought-after basses of his generation. After completing his studies at the Sibelius Academy in Helsinki, he made his stage debut as Mozart’s Figaro and from 2005 to 2010 was a member of the Baden State Theatre in Karlsruhe. Since then he has given guest performances at many leading opera houses and international festivals. Among the conductors with whom he has worked are Kent Nagano, Theodor Currentzis, Fabio Luisi, Riccardo Muti, Marc Minkowski, Alain Altinoglu, Thomas Hengelbrock, Zubin Mehta and Nikolaus Harnoncourt.

Recent highlights have included Fiesco (Simon Boccanegra) at the Paris Opéra, Herrmann (Tannhäuser) for the Zurich Opera, Sarastro (Die Zauberflöte) at the Royal Opera House, Covent Garden, the Commendatore (Don Giovanni) at the Lyric Opera of Chicago, the Dutch National Opera in Amsterdam and at the 2016 Salzburg Festival, the Grand Inquisitor (Don Carlo) at the Teatro Real in Madrid and Wotan (Das Rheingold) at the Ruhrtriennale. Audiences at the Bavarian State Opera have heard him as Balthazar (La Favorite), as Raimondo (Lucia di Lammermoor), as Sarastro and as Massimiliano (I masnadieri).

As a concert artist, too, Mika Kares is in demand in a wide-ranging repertoire that he has performed with orchestras such as the Vienna Philharmonic, the Helsinki Philharmonic, the Finnish Radio Symphony Orchestra and the Munich Radio Orchestra. His most recent engagements include Mozart’s Requiem with the Chicago Symphony Orchestra under Riccardo Muti, Verdi’s Requiem with the Oslo Philharmonic under Jun Märkl, Beethoven’s Ninth Symphony under Sakari Oramo at the BBC Proms and with the Helsinki Philharmonic under Eva Ollikainen and Rossini’s Stabat Mater under Marcus Creed in Utrecht.

Plans include the Padre Guardiano (La forza del destino) and King Marke (Tristan und Isolde) at the Bavarian State Opera and the Inquisitor in Calixto Bieito’s new production of Prokofiev’s The Fiery Angel at the Teatro Real. On the concert platform he will be heard as the bass soloist in Shostakovich’s Fourteenth Symphony with the Oslo Philharmonic under Klaus Mäkelä, as Hunding (Die Walküre) with the Orchestre de Paris under Jaap van Zweden, as the bass soloist in Verdi’s Requiem with the Copenhagen Philharmonic and in Beethoven’s Ninth Symphony with the NHK Symphony Orchestra in Tokyo – in both cases under Fabio Luisi – and as King René (Iolanta) with the Berlin Philharmonic under Kirill Petrenko in Berlin and Baden-Baden.