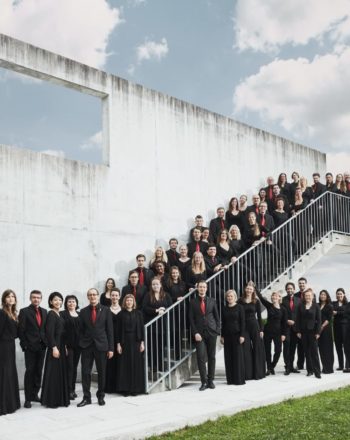 The Salzburg Bach Choir was founded in 1983 and during its nearly 40-year existence has developed into one of the leading vocal ensembles not only in Austria but internationally, too. The Choir appears regularly at the Salzburg Festival, where it has been acclaimed at numerous concerts as well as in opera productions. Highlights include Idomeneo, Theodora, the world premiere of Thomas Adès’s The Exterminating Angel, Ariodante and Alcina. The Choir also appears regularly at the Salzburg Mozartwoche Festival, most recently in productions of Lucio Silla, Orfeo ed Euridice, Die Entführung aus dem Serail and Thamos. At the Salzburg Easter Festival it has been heard in Tosca and Die Meistersinger von Nürnberg under Christian Thielemann. Guest appearances have taken the Choir to the Vienna Musikverein, the Linz Bruckner-haus, the Amsterdam Concertgebouw, the Berlin Konzerthaus, the Handel Festivals in Halle and Göttingen, the Enescu Festival in Bucharest and the Borusan Istanbul Philharmonic as well as to France, Italy, Greece, Spain and Switzerland. In 2019 the Choir appeared in Mahler’s Eighth Symphony under Kirill Petrenko at the Bregenz Festspielhaus.

Thanks to its flexible resources and stylistic versatility, the Salzburg Bach Choir is able to explore a wide range of works extending from the vocal polyphony of the Renaissance to the great oratorios of the Baroque, Classical and Romantic periods and also 20th-century works. The Choir has also been acclaimed for its performances of contemporary music, including world premieres of works by Georg Friedrich Haas and Mauricio Sotelo.

In addition to its focus on Mozart, the Salzburg Bach Choir also specializes in a cappella works and each year organizes its own series of concerts under the title Chorage®, exploring five centuries of music. Its regular performances of Tallis’s 40-part Spem in alium at Salzburg’s St Peter’s Church have been as critically acclaimed as its interpretations of works by Ligeti and Beat Furrer at the International Mozarteum Foundation’s Dialogues Festival.